Skip to content Skip to sidebar Skip to footer

Inflation – How did we get here?

Simply, unsound money, often referred to as “fiat money”. Fiat money is a government-issued currency that is not backed by a commodity or hard-asset (i.e., Gold, Bitcoin). This gives central banks more control over the economy as they dictate how much money to print. Unsound money is the main culprit for inflation, income inequality, drawn out wars, and crony capitalism. TLDR; it ain’t good.

Our current monetary system is based on fake money. There is nothing holding Mr. Trudeau or Mr. Biden back from printing more money. It’s that simple. And once they start this train, it’s extremely difficult to stop. The current Debt-to-GDP ratio in the US is 127% (i.e., to create $1 of GDP we need to borrow $1.27). Therefore, we’re no longer in an economic cycle, we’re in a debt cycle. At the current levels of debt, raising interest rates to curb inflation becomes challenging. As we’re beginning to see, this can ruin company valuations, bankrupt companies, and potentially bankrupt your neighbour…

Okay, so what’s the answer?

Sound money. The US Dollar was backed by gold during the 19th/20th century (until the first world war in 1914). During this time, we witnessed major advancements in technology as well as the arts. We truly went “zero to one” (see Peter Theil’s book “Zero to One”). Why was this? My argument is that people had a lower time preference than the generations that followed [to have a low time preference is someone who prepares for, and is optimistic about, the future. To have a high time preference is someone who spends and lives for the moment].

These changes in time preference are directly correlated with sound and unsound money. During the 19th century when the dollar was backed by gold, people knew that their hard-earned savings would be valuable years later. They had optimism and hope for the future. Therefore, they could spend years building a business, or sculpting a work of art. People and society were practicing the art of delayed gratification. They delayed the rewards of today for greater rewards tomorrow.

Why was gold a source of sound money? High Stock to Flow Ratio. Stock to flow ratio is exactly how it sounds. Gold has high stock (the amount currently in circulation) and low flow (the amount being produced annually). Gold is notoriously difficult and expensive to mine and is the rarest earth metal. Thus the ‘flow’ of gold increases consistently at around 1-2% per year. The gold-backed dollar provided society with confidence their purchasing power wasn’t going to erode drastically, and thus had low time preferences.

However, enter the World War I and we decide to abandon the gold-backed dollar (then in 1971 we abandoned it completed) and the government begins printing more money than is backed by gold in order to finance the war (i.e., fiat). Since abandoning the gold-backed currency, the dollar has continually lost its value. Since 1913 (when the Federal Reserve took over Central Banking) the US Dollar has lost 96% of its value. 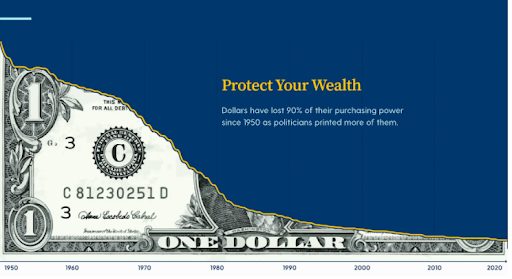 Here is a similar graph but inverse, the increase in the Feds balance sheet (i.e., cash). 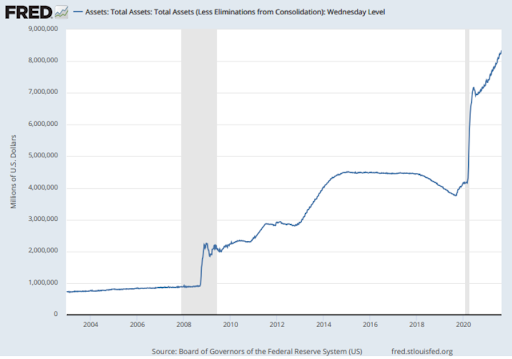 The Fed’s balance sheet has more than doubled since 2020 and has increased almost 10x since 2004. If you’re going to take one thing away from this article, then take this: 40% of ALL money in the US has been printed in the last 12 months. That is a very low stock to flow ratio, and one that promotes a high time preference. Oh, and the US government is spending $6m… per minute…

Curbing inflation is challenging. Expect rate increases to continue. Expect volatility in the energy markets. And expect to operate as a war-time CEO for the next 12-18 months.

Inflation – How did we get here?